I realised this month that I have yet to use my blog to talk about the specifics of how I coach or what I do in the sessions I run; possibly, in part, because I am not in any way an expert coach. I do, however, love hearing about other coaches' tried-and-tested favourite games and activities and testing them out with my own classes. Knowing that many others feel the same way as me, I've decided this week to write about four of my favourite games that I use often in my RDA sessions. Five, if you include one small, silly honourable mention. Happy riding...


The Troll Game (or Bridge Game)

This game, which I first played in one of my own childhood riding lessons, became my own when I taught it to an RDA class and included the troll element (because trolls, of course, are known for dwelling underneath bridges). I like it so much because my riders really enjoy it, and are always trying to outsmart the "troll queen"! The game uses four "bridges" (marked out with poles) which are owned by a troll (you, unless you want to delegate the role to a helper!). The troll doesn't take kindly to trespassers, and tries to catch out those who dare to ride over them..,

Set up: Four trotting poles, placed 2-3m (wide enough for a horse, leader and any side walkers) parallel to the track at A, E, C, and B. These are your "bridges".

How to play: Space your horses and riders evenly around the arena on one rein. If you have four riders this is easy: everyone starts on a bridge. If you have more than four, spread them out as evenly as you can.

The troll stands in the middle of the arena. To add to the theatrical element of this game, you may wish to give yourself special troll attributes: pink hair, silly shoes, a mustache. Explain to your riders (who could be troll-hunters, billy goats gruff, or just opportunistic equestrians) that the troll is going to go to sleep, and doesn't want to find anybody on their bridges when they wake up. I pretend to close my eyes and sleep, but I am, naturally, still keeping an eye on the arena. Everyone has to walk on around the outside track, crossing each of the "bridges". When the troll wakes up, they give a countdown from either 5 (easy) or 3 (more difficult), and all riders have to halt. If anyone is found on a bridge, they are either "out", or receive some sort of forfeit of the troll's choosing.

Change the rein every three halts to keep things balanced for the horses. Although it started out as an elimination game, this can be played with only one rider: let them choose when to change direction! One of my riders evaded me with sneaky changes of rein for almost twenty minutes when he was on his own in his class one week and chose to play it. I've never lived it down.

What it teaches: Aids to walk on, halt, and make variation within the paces: a tactical approach to this game means walking very quickly over the bridges and slowing down for the corners, all whilst trying to guess when the troll is going to wake up relative to your position in the arena.

Progressions: I let my riders come off the lead rein for this game as soon as I am happy that they can halt safely and keep their pony in a sensible walk (no sneaking off in trot!). Everyone has a helper on the ground to make sure things progress smoothly. For more able riders in a small enough group I would also allow trotting on the long sides of the school.

This is a simple game which can be adapted on the spot to the riders in front of you. I often use it as a warm up activity because it gets everyone's brains warmed up, as well as physical riding skills, and is also a good way of introducing some new terminology and movements to riders. No set up required; you just need to set up a clear, verbal "key" for which colours/numbers/words equate to which instruction.

How to play: Start your ride off on one rein, well spaced out. Decide ahead of time which instructions you want to use as part of the game. I am currently favouring colours, so as an example:

Red: stop (halt)
Green: go (walk on)
Yellow: faster walk (using aids to suit individual)
Blue: small (5m) circle
Orange: give your pony a stretch (free walk: I start this off by asking riders to reach their hands forwards as far as they can whilst still sitting up tall)
Indigo: change the rein by turning a small circle
Violet: give your pony a pat: the game is over

Shout out your instructions in a random order, allowing riders enough time to complete each one and prompting as necessary.

Progressions: Instructions can be added (or not) to suit any group. I usually start the game with two or three and for some classes this is plenty; for others, I will gradually add additional instructions.  As with the troll game, this can be ridden on or off the lead to suit individuals, and could include faster paces if wished. 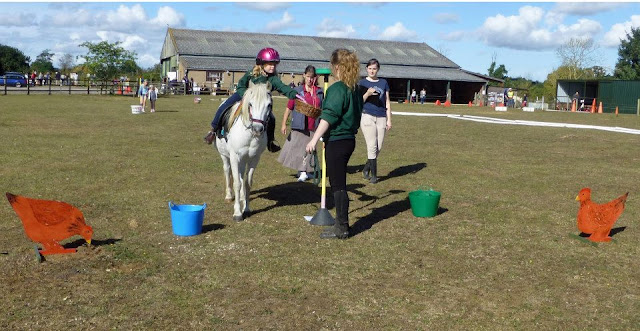 Set up: Some sort of prop: buckets, cones, toys etc, in each corner of the arena. Each one should be obviously different from one another e.g. a different colour, different toy animals could also work well. I usually use different coloured buckets as we have lots of bright ones to choose from in our games cupboard.

How to play: Riders are allowed to ride around the arena wherever they want, providing they follow a few ground rules. I explain to my riders that they must keep walking on (stopping could be used to cheat!), stay a safe distance from other horses (helpers help me to reinforce this), and must not go faster than a walk. I then shout out a colour at random, and they must ride to the corresponding corner. The last rider to reach the corner is "out", if you want to play as an elimination game. I sometimes play by getting the rider who's been caught "out" to come into the middle with me and shout out the next colour; they then rejoin the game and the next "out" rider comes into the middle...

There is an alternative version of this game which I played as a child, which involves riders choosing a corner for themselves when a caller in the middle of the arena counts down from five with their eyes closed. The caller then shouts out a colour, and whoever is occupying the corresponding corner is "out". My riders seem to enjoy the former version more, but both are good fun if managed correctly to avoid horses getting too close to one another!

What it teaches: My riders who are loving this game at the moment don't realise that it is the first time they have ridden in open order. I encourage them to change direction, to ride different shapes, and to be aware of the others in their class: all valuable skills for future independence in the saddle.

Progressions: As with the two previous games, this can be played with varying levels of independence, especially when riders have reached a good level of responsibility for spacing between horses. Whilst not necessarily a progression, a variation on the game could involve playing music for the "open order" elements, with a colour called out each time the music stops.

Set up: Two dice. If using regular dice, one will indicate pace (odd numbers for walk, even for trot, or 1 & 4 for walk, 2 & 5 for trot, 3 & 6 for canter), and the other movements (20m circle, change rein across diagonal, etc). You will need to write a key for the movements before starting the game so you have an easy point of reference - if you want more movements, perhaps use an additional die of a different colour (so you have "white 1 = X, black 1 = Y"). If you have larger dice, you can convert these by sticking post it notes/pieces of paper on each of the faces for your instructions. I have seen this done to great effect, especially as riders can roll the dice themselves on horseback!

How to play: The complicated part of this game is setting it up. When you know what each roll of the dice means, all you have to do is communicate the instructions to your riders.

What it teaches: Whatever you want it to teach! I think that unlike the others I've listed, this game works really well for individual lessons. It could be use to teach or reinforce new movements, promote recall skills, or simply switch up the format of a more conventional riding lesson. You're the boss!

Progressions: Although I call this "Dressage by Numbers", playing the game as if riding a dressage test is actually its final form. For riders who aren't quite ready for or used to the structure and focus required by a dressage test, this is a fun way of introducing some new movements and connecting them up. There is no reason that movements can't stray away from strict "dressage movements": they could involve bending through cones or throwing beanbags into buckets as readily as they might include a leg yield or medium trot strides. For some riders, it may also be a fun progression to record the movements as they are rolled and to ride it in one go (read or from memory). Who knows - you could be rolling a prize-winning freestyle...

The point of the Bean Game is little more than being silly and having fun (although at a push I suppose it does promote confidence in the saddle as it requires riders to let go of the reins, etc...), but I inherited it from a coach who is no longer with our group and have somehow ended up with it as a bit of a signature warm up. The actions, called out (and/or performed) in any order and at any speed are as follows: