Woody's Roundup: what I learnt from coaching outside my comfort zone


I teach a lot of different riders as an RDA coach, but that doesn't mean that I don't have a comfort zone. I don't often teach riders below school age, for example, as they are usually accommodated in daytime groups during the week, perhaps moving up to a class a bit like mine when they are older and more capable on horseback. And whilst my riders represent a huge spectrum of conditions, my biggest area of inexperience is with a disability well represented within RDA: autism.

So, when our group chairman told me in January that my newest rider would be 4 years old, autistic, and non-verbal, I have to admit I did find myself wondering exactly how I was going to get this right.

This is where we meet Woody, the first of my riders to be featured individually on this blog.


I approached Woody's first ride as I would any new rider's: with no expectations. In the interests of working out how we were going to work together, I also delegated the rest of his group to another coach for the day (this is a luxury I don't always have, but it worked out well on this occasion). Although the inclement January weather meant that we would all be sharing the same arena, it did mean that my own focus could be a bit narrower than usual.

One thing was very clear from Woody's first encounter with a pony: he wasn't scared. Sometimes a fear of riding (or of horses in general) can put the brakes on any sort of productive relationship with RDA. Woody, however, was seemingly unfazed by walking onto the mounting gallery and being lifted onto Polo, a veteran and suitably small steed. It was the other stuff that wasn't naturally programmed in. For the first few rides, for instance, we had to support his back to stop him from leaning back until he was almost horizontal in the saddle. But could I blame him, when he was used to the sensation of sitting in a chair with a back and not a contraption as strange as a saddle on a moving animal? Of course not. Woody was also very keen to tell us when he was tired and had had enough, by attempting an unscheduled and very wriggly dismount. It would be a rare four year old who managed a full hour on horseback at any point, let alone their inaugural riding lesson, so that was fine too. I just made sure that when the dismount did happen, it was less spontaneous than what Woody was planning.

In the rides that followed, I got a lot of things wrong and learnt a lot of things as a result. My biggest mistake was leaving Woody waiting too long in the gallery of the indoor school whilst I mounted up the two older boys in the class. By the time he did get on his pony he was so worked up from waiting that he was trying to clamber off as soon as he was on board. I might have busy Saturday mornings, teaching pretty much back to back, but I definitely hadn't done right by him. It was time for a regroup.

I remembered an article I had read some time ago in RDA Magazine about autistic participants; our own county coach, Karen Stubbs, had contributed a lot of the material, and I had found it interesting, if not relevant to the riders on my books at the time. In the article Karen described the idea of a "silent ride" and its benefits for autistic participants. Recalling this spurred me on to reorganise the way that Woody would experience his riding lessons. I had a spare 30 minute slot in the arena between the morning lessons finishing and the afternoon private lessons starting, which meant I could avoid the extra noise and activity that is a natural by-product of group lessons.

This was a good decision for everyone. The yard seems almost ghostly quiet when the majority of riders and volunteers go home just after 1pm, and Woody was so much more at ease in this new environment; more ready to take in what was going on. We rode for longer that week, maybe fifteen minutes, and were even able to try a short trot, which he loved. The level of noise and action: only my instructions, and encouragement from Woody's family up in the gallery, seemed to suit him well. I could see a way forward that both of us were able to understand.

Woody rode in his own slot for the next five months or so, and I learnt a lot about him. He also seemed to soak up a little bit more of what I was trying to teach him each week. I am a very "verbal" coach, mirroring my "real world" (outside of RDA) love of words and writing. This plays into my hands when I am working with visually impaired riders, but in Woody's case was a definite weakness. I tried to keep my "words" as physical and as succinct as I could for him, whether the distinction between "trot", "walk", "stop", or by physically correcting his position in the saddle to keep him as balanced as possible. In the beginning, Woody rode with me on one side and another helper on the other, each of us gently balancing his position (and encouraging him not to swing his legs up and down) with a hand on each ankle. As time went on, I was able to move further and further away and coach the "unit" of Woody, his pony, leader, and side walker from a distance, as would be the case during a group lesson.

Woody also adapted pretty seamlessly to the use of stirrups, after being completely confused by them the first time I tried (another coach's mistake, if an honest one!). This was another breakthrough, and coupled with the improvement in his core strength after riding, stirrupless, for three or four months, it meant that his position no longer needed the input that it had originally to keep him safe in the saddle. I tried all sorts of reins before remembering another point from the RDA Magazine article: there is no reason for a rider to be forced to hold on, especially if they are already balanced. I found instead that Woody showed more of an interest in holding onto a pair of "bunny ears", made by RDA tack specialist Shane Mulryan. These are soft, made of stuffed suede, and can be moved by the rider to hold in a position they find comfortable. From a sensory perspective, I can definitely see why Woody prefers them to a pimply pair of rubber reins. I have ideas to try and reintroduce Woody to reins in the future, because I think he will eventually be interested in the idea of steering a pony himself, but I'm in no rush.


Whilst it hasn't all been plain sailing in Woody's individual lessons, his progress has continued through the little blips; often the result of him feeling overstimulated, unwell or tired, rather than some fundamental incompatibility with riding. His self expression also began to grow more varied a couple of months in, including very obvious excitement about being around the horses. One weekend, he walked onto the mounting ramp and said, very clearly, "Ready!". I looked at his mum: is this new? She looked back at him, then at me: "New as in, new now." We still get quite a lot of "ready!", and another word which sounds to me very much like "riding". It makes us all smile whenever we hear it. I also introduced simple games and actions to Woody: he particularly enjoys playing with the sponge "horse balls" (they have handles); things which make noises (like tapping on a hat, or the pommel of the saddle); and giving his pony hugs. RDA ponies are typically unflappable and very cuddly, so this suits everyone.

In July, I decided to reintegrate Woody into the group lesson. Although I had reason to feel at least moderately confident in my decision, there was still an element of "leap of faith" running through my head. I told myself that if it didn't work, my little half hour quiet slot had not disappeared. If he didn't take to the environment, as he hadn't in those first couple of weeks, it didn't matter. There would be plenty more opportunities to get it right for him. As it happened, he rode for a record 40 minutes. This wouldn't have been possible without Zoe, an amazing volunteer who worked with me in many of Woody's individual lessons and has a real gift for understanding participants on the autistic spectrum. Stories like Woody's just don't work out the same without the dedication and patience of our volunteers. I am also very lucky to have the trust and support of Woody's family, who are always happy to put his actions into context or give me useful information about what might work next time. It takes a village (certainly not a single coach) to raise an RDA rider.

I feel like I am working with a child who has grown up a lot from our first couple of weeks, even though he has only just turned five. I am increasingly impressed by how much Woody takes in. He does not need to be told that it's best to hold on, or at least rest his hands on the pommel of the saddle, when it's time to trot; he's worked this out himself. Whilst we've definitely had some moments where he has been testing boundaries, a firm, fair "no" generally means he chooses not to repeat the test the next time he rides. Whilst I still don't like to keep him waiting, he is much more patient than he was in those first few weeks, too. Even when I base my hopes or expectations on how well he did in his last riding lesson, he manages to go that little bit further every time he rides.

I feel confident about Woody's future with RDA, and my ability to guide and teach him. He is clearly at ease around the horses, coming to approach his pony at the mounting ramp with me each week independent of his parents. I am looking forward to seeing how he progresses in future lessons, and seeing him receive his first rosettes at our group's Fun Day in September. Woody definitely hasn't made me an expert in, or an experienced coach of riders with autism; I have a long way to go before I get to that stage. He has, however, encouraged me to refocus my priorities as a coach, and be patient and creative in the way I teach. I am, most importantly, becoming an expert in him as a rider. Inside or out of our comfort zone, isn't that the aim for everyone we coach? 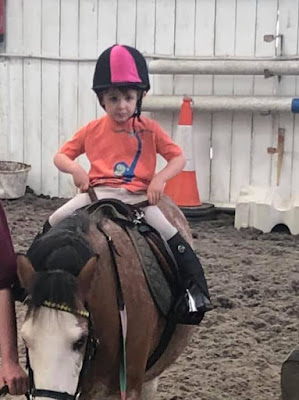 With huge thanks to Woody's lovely parents, Lel and Tim, for trusting me with their child and always being happy to keep the conversation going. A special thank you too to their friend and long-standing member of our group, Anna, who is his biggest supporter!