Fun, sun, and Clare Balding: How our annual Fun Day brought the best out of our whole RDA group


"Dad was rather contemplative on the way home. I don’t think he’s ever really met such a range of your riders, or had the chance to observe them at close quarters. (Me neither, but I have met a few more than him recently.) He said he hadn’t really understood before just how much impact RDA can have on a child. He said, “I thought it was fun for them, and maybe helped muscles to stretch like for Marcus when he was younger, but it’s more than that.”"

I took this from an email my Mum sent to me after spending the day at the annual Abingdon RDA Fun Day. It was her first, and my first in a few years (it's usually a rare opportunity for me to take a Saturday off without finding cover for my lessons). My parents, best described as "notoriously unhorsey", came away last Saturday feeling like they had been part of something very special, as did many more participants, volunteers, parents, carers, and supporters.

This year, I was invited to be a judge by this year's organisers, Alice (my partner in crime on Instagram and in almost every other part of RDA life) and Amanda (who was relishing her newly-bestowed qualified coach status - congratulations again, Amanda!). It's a flattering thing to be asked to judge something, because it means that those asking trust your... well... judgement. Our riders traditionally participate in three events at a Fun Day: a gymkhana (with traditional placings); horse knowledge (where bronze, silver, gold or super gold can be achieved), and a handy pony course loosely based on the RDA Countryside Challenge. I was asked to judge the latter. This year, marks were still given for my event (separately for effort and accuracy) but traditional placings were replaced with a focus on what had impressed the judges the most.

I loved this. Whilst I am very keen on "real" competitions and the values they teach our riders, when we are judging our own riders at home, we are not judging an even semi-level playing field of riders who will all progress to RDA or Para competitions. No matter how classes are split, it can be difficult ranking the majority of your own group, and those who feel most strongly about having traditional placings are likely to be the riders who already compete at Regional or National level anyway.

Writing my comment at the bottom of the scoresheet quickly became my favourite part of each round. I was able to meet a few riders I had never encountered before (we didn't judge our own riders, which I think was very reasonable) and see the progress of others I know from other coaches' classes. I made an effort to be as fair and as rigorous in my scoring as I could, yes, but being able to celebrate the best of every rider I saw felt like the best possible way of upholding RDA's ethos. Some of our helpers spent part of their day painstakingly writing out the judge's comments onto certificates for each rider, so they had a record of how they were celebrated that day.

Every horse on the yard was in action and on their very best behaviour, thanks to further strategically placed volunteers who handled them during the events, mounted and dismounted riders, and offered them drinks and snacks (well, hay) during their breaks. It was one of those beautiful blue and gold September days without a cloud in the sky, and as I greeted each of my competitors, sitting tall and self-assured on their steeds, I felt very fortunate indeed to be exactly where I was. 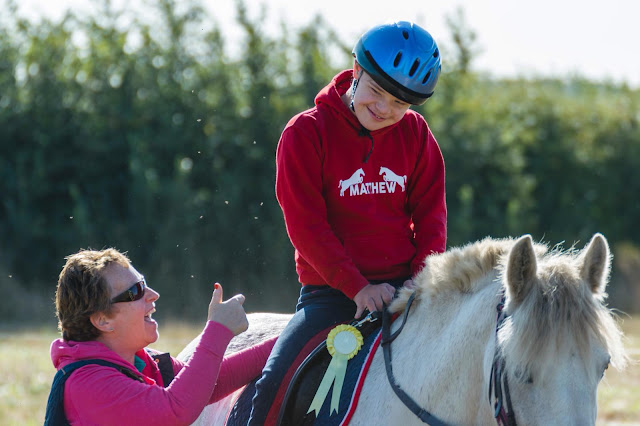 If any kind of event brings a big chunk of an RDA group together, it becomes a family event by default. Not merely because riders are able to attend with their families, but because the ethos of an RDA group is special enough to make unrelated strangers feel that they are part of a big, horsey "family". There were games and activities thoughtfully provided so that friends and siblings could enjoy themselves with or without our riders. My parents were in charge of a craft stall which offered the chance to decorate a repurposed rosette (we were donated three bulging bin bags of them earlier in the summer), and found themselves getting to know a generous handful of the stories which bring families to our group over fistfuls of felt tip pens, coloured ribbon, and diamante stickers.

Out on the obstacle course, we were powered by team spirit and understanding. One rider, 15 year old Rosie, was tackling her first ever competitive experience. Rosie started riding with Alice in the spring, and fell hard and fast for horses and everything that comes with them; she has recently been able to start volunteering, and helps me out at the weekends too. A few weeks ago she reached one of the less enjoyable equestrian milestones: her first fall, which left a dent in her confidence. As such, she was less relaxed and chatty than the rest of the riders to come through my arena that day. With each element Rosie rode, she seemed to pick up an extra supporter. Expertly managed by Julie and Megan, helpers from her regular weekly classes; buoyed up by Mia, one of her riding friends; pushed just enough by her coach; cheered on by what seemed to be an entire cheerleading team of spectators along the fence line. It was a genuinely moving experience to see and feel everyone band together to make it work for Rosie. As it happened, she rode brilliantly, winning a trophy for the highest score of the day.

And if you remember Woody, he took everything about his first equestrian event in his stride, including a trophy for the best fancy dress (see below to see why). The child who struggled with waiting to mount up in his second week of riding lessons and tried to clamber off the pony in his third was at ease amongst the hustle and bustle, the unfamiliar equipment and faces. After all, the most important face was his pony's, and that one was very familiar indeed! I smiled from ear to ear seeing him collect his first rosettes; I welled up a bit when his mum told me later that it had been his longest public day out to date.

An already special day was made even more so by a visit from long-time RDA supporter (amongst many other things) Clare Balding. National Office were kind enough to organise this for us as thanks for assisting with social media coverage at the National Championships in July, and it would be a considerable understatement to say that we were excited about it. Clare sold and signed copies of her new book, 'The Racehorse Who Learned to Dance'. I wouldn't dream of using this platform for spoilers, but it is a very touching story with RDA at the heart of its plot, and Clare was generous enough to donate half of the profits from the day's book sales to our group.

As I was so preoccupied with judging, I spent a very short while talking to Clare (possibly for the best, as I don't wear "starstruck" especially well), but was bowled over by how genuinely interested she was in our group. A small group of teenage riders were tasked with showing her around the yard and explaining the various events that were happening, and she was never without a question or word of encouragement. One group of riders can now proudly say that Clare Balding cheered them on for their gymkhana races; my own childhood gymkhanas seem rather disappointing in comparison.

There couldn't have been a better day to welcome any special guest into our little world. It wasn't just a case of the sun shining and some fun being had with ponies: feelings of belonging, friendship, ambition and enjoyment shone through just as bright. As it happened, Clare wasn't our only VIP. We were very fortunate to have Wendy Payne, Abingdon RDA's founding chairman, present the riders with their prizes. Anyone starting a life-improving organisation, whether RDA group or otherwise, must hope that it continues to thrive and make an impact for years after their leadership. I don't believe that we could've done a better job of showcasing Wendy's legacy.

There were long-standing friends who had ridden together for the best part of a decade enjoying each other's company, and looking out for younger riders and their own budding RDA friendships. I saw parents and carers catching up and sharing experiences; siblings welcomed into groups of RDA friends and RDA friends into other riders' families. I was tackled with gusto by one of my riders, eight year old Sophia, as I crept back onto the yard to use the toilet during a judging break ("IT'S INDIA!"). I believe she gave Clare a similar reception at the very front of the book signing queue, and earned herself a special inscription in her book as a reward for her enthusiasm. Erin and Daisy, a
dynamic 12-year-old duo from one of our Saturday groups, managed to get themselves hired as Clare's PAs, following her around and dishing out signed photographs. My Mum, meanwhile, cemented an already firm friendship with five year old Lily, who she had met during our summer holiday Pony Days. My Dad went home feeling ten feet tall after Clare said the lemon cake he made was "delicious". Next time I need a cake for a fundraising event, I know he'll insist he makes three.


Much like my Dad, I found myself very contemplative as I looked back over our day last Saturday evening. I often am after any Saturday at the stables, but it is easiest to feel inspired after a big or successful event; this happened to be both. It must be rare that a day like this (even one designated a "Fun Day"!) is so universally enjoyable. Our volunteers were made to feel appreciated, their skills utilised and celebrated. This meant that they were in an optimum position to support our riders and enable them to access the event, and enjoy being in the saddle, at a level which suited them. Our riders' families kept the event buzzing (and punctual). Whenever I was on the yard I felt like I could hear an almost constant stream of positive comments. Aided by happy volunteers and riders, our horses, of course, put not a hoof wrong between them. Whilst the gorgeous weather and distinguished guests certainly helped to complete the picture of one of the most special group events I have ever attended, it was the care and teamwork behind the scenes which lifted everything; which enabled a simple Fun Day to bring the best out of every attendee. Dad was right: RDA is always "more than that".


With enormous thanks to everyone involved in this year's Fun Day; especially Alice and Amanda, for bringing us all together, keeping us safe, motivating us and powering the day with love, care, and good humour. You were nothing short of amazing.
Labels: #AbingdonRDA