Learning to ride before learning to dance: Thomas and the power of RDA

I was weighing my riders a few weeks ago (we do this periodically for horse welfare purposes). One of them, six year old Thomas, weighed in at just over three stone. "Is that big?" he asked. "No, it isn't very big." I said. "Oh..." said Thomas, clearly disappointed that my own definitions of "big" didn't match up to his.

A thought flashed through my mind that although Thomas was still a "little rider" in many ways, he was still bigger, stronger, and more grown up than he was six months ago. I back-pedalled: "It's not as big as grown-ups like me, Thomas, but it's bigger than you used to be. And that's pretty cool." He nodded sagely.

Ever since, I've been contemplating how much "bigger" my riders are than what they were six, or twelve, or eighteen months ago. Many of my riders are primary school age, when getting taller or heavier is the very tip of the iceberg for the progress they are making. This is what led me to introduce you properly to Thomas.


I've written two "Rider Stories" so far: one about a rider whose disability is unusual within the organisation (Natalie), and one about a rider whose disability was on the unusual side for my own experience (Woody). Thomas, who has cerebral palsy, is neither of these things. CP is a well represented disability within RDA, and indeed on the international para circuit. Broadly speaking, cerebral palsy is 'caused by a problem with the brain that occurs before, during, or soon after birth.' That problem with the brain then translates into life-long effects on an individual's movement and coordination, and sometimes other things such as speech or mental processing. This is an incredibly brief, sweeping definition of a condition which changes with every person who lives with it, and can even change for an individual over the course of their lifetime. The first RDA rider I ever knew has CP, and seven of my group's weekend riders alone live with the condition. Thomas, like each of those other riders, is unique in how it manifests for him, and therefore, how riding works for him. And "work" it certainly does.

When I first met Thomas, he was just about six months post-op following Selective Dorsal Rhizotomy surgery. SDR is, like many things to do with CP and its management, complicated (I would recommend reading the linked page from Scope which is very succinct), but is designed to reduce high muscle tone (spasticity), particularly in the legs. It is then hoped that the procedure, with extensive follow up physiotherapy, gives those who receive it better control of their mobility. For many, this could mean increased chances of walking (and from that running, jumping, dancing...) independently. Another rider in Thomas' class, Sophia, is two years older than him and shows me every week what a difference the procedure can make.

SDR is not, however, a miracle cure (no such thing exists for CP), and is a huge undertaking for an entire family and support network. Thomas' family fundraised extensively for him to have the operation in the first place, and have continued to do so to fund his ongoing physiotherapy to give him the best chance of benefiting fully from it. His campaign's name, "Help Thomas 2 Dance", serves as a reminder that the family's huge commitment is for the sake of enabling something that most take for granted. Riding, with its huge therapeutic benefits, is one part of a gradually assembled jigsaw puzzle.

Thomas was not new to riding when we first met, but had moved from a weeknight class because he was struggling to keep up his energy levels for riding after a day at school. I would not describe him, even then, as a shy child, but he was also not the sort of extra-extroverted rider who throws himself and all his trust immediately into a new coach and new class set-up. With hindsight, I can understand this completely: part personality, and part because Thomas has more experience of being cautious of and frustrated by physical experiences than most non-disabled adults do. In his second Saturday lesson, taught by one of my then-trainee coaches, he managed to trot a full lap of the arena (as opposed to a single long side) for the first time. The achievement was rightly celebrated, and I saw for the first time a flash of steely determination in Thomas' face. I can do this!

I had a trainee coach teaching Thomas' class for the first few months, and his peers at the time were all older and already quite established riders. As a result, I opted to act as Thomas' main helper, to help him build his skills a little faster and make sure he felt comfortable with everything the class was doing. This yielded two excellent results: the first, the realisation that I needed to aim to spend at least a little one-on-one time with all my riders, especially if we were new to one another. The second was that Thomas and I got to work out, properly, how to work together.

I learnt very quickly that Thomas found riding a lot of fun, yes, but also had a cast iron work ethic. Given that his weekly physio schedule is tougher in terms of hours and personal challenge than that of an average adult with a gym membership, this isn't such a surprise. Thomas isn't too young to know that it's to help him walk (and dance) on his own, nor is he too young to want that for himself. And, like so many RDA riders whose paths I have crossed, he loves the feeling of being good at something. As the only rider in his family, being good at riding holds extra power for Thomas. He is the resident expert: he can do something that neither his mum, nor his dad, nor even his twin brother, Dylan, can do. That's pretty special, no matter how you define "good".

As Thomas' trust in us grew, so did his enthusiasm for new challenges. One week, when I was working with him individually, I suggested that he tried balancing whilst stood up in the stirrups. It's a tough task for any rider, and just so happens to use all of the muscles in the lower body that Thomas is building up in his physio sessions. "How long do you think, Thomas?" I asked, "Ten seconds?" He narrowed his eyes, "Twenty." he said, resolutely. I dutifully counted to twenty. Twenty-five, actually, because he wanted to beat his own goal. His legs shook as he sat back down in the saddle, but he was obviously pleased with himself. I suggested that we tried it on the move, for an extra challenge. "Twenty again!" he declared, and turned his determined frown to my hand, hovering over his shin to help support him as we moved off. I took his point and dropped my hand to my side. He knew he could; I just had to be there.

Thomas turned six this January, and passed his second SDR anniversary in September.  "Growth" has been and is the name of the game this year. Thomas has, for example, discovered the wonderful world of school holiday Pony Days, something which I think was just that little bit too daunting a year ago. Staying for just the morning for his first experience, Thomas was exhausted by lunchtime, albeit maintaining his trademark determination by powering through to lead a pony himself for the first time. By the time summer rolled around, he had the stamina to stay all day and ride more than once, with only a small battle of wills at the end of the day about it being a good idea to use his wheelchair for the sake of his tired limbs. I continue to encourage Thomas to make choices for himself as a rider, and he has breezed through new or challenging situations which would've made him hesitate a year ago. The child I first started coaching would always check if someone (me, or a side walker) would be running alongside him when trotting before moving off. One day this spring, I fell away after a couple of strides, leaving Thomas to continue with his newly established rising trot with only a leader at his pony's head. No backward glance: he had it under control.

We have also weathered some tougher weeks, when riding acts as an antidote to the hard graft synonymous with intensive "traditional" physio. I am always heartened by his enthusiasm for seeing the horses, his riding friends, and favourite helpers, even if his body is exhausted. Most importantly, I think Thomas now understands that his RDA group is with him for the journey: not because he is a little disabled boy who needs people's sympathy, but because he is a brave, tough rider who deserves people's belief.

For me, Thomas' story is such a good example of the power of RDA because there is no singular spark or big turning point. (Of course, the SDR operation was a huge turning point for him and his entire family, but I didn't know him before it was carried out.) His successes are the result of time, of the accumulation of hard graft, of growing older and more willing to get stuck in to whatever comes his way. The child who was initially wary of new helpers will now happily chat away to anyone in the arena. At the moment, Harry Potter seems to be his icebreaker of choice, and during lulls in lessons I will often hear Thomas casting spells on whoever is walking with him that day. He is much more open in the way he tackles new challenges, and in expressing the enjoyment that riding gives him. His physical strength continues to build, which with it brings further independence and further opportunities. He often asks me to watch him walking independently when he is waiting in the gallery before his lessons. He also continues to outwit me in the Troll Game on a frustratingly regular basis. I am gradually introducing basic dressage movements to his class, too: Thomas might be working towards dancing with his own two feet, but I'm looking forward to the moment when he realises he can already do it on a horse.

So, what of the future? The past few months in and out of RDA have shown Thomas how much he is and will be capable of, and every achievement seems to power him up for the next one. As his coach, I want him to keep having fun, and keep building his independence and discipline in the saddle. I want Thomas to be able to keep linking up the fun and freedom he takes from RDA sessions with the hard work that was a part of his vocabulary long before we met. Everything else, I'm leaving up to him. He'll tell me when he's ready. 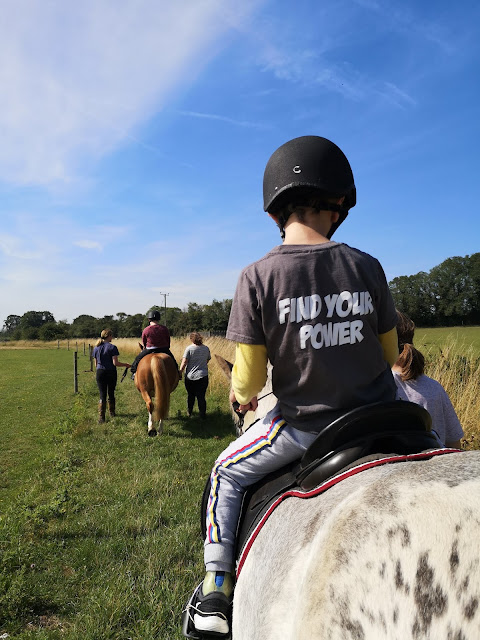 With thanks to Thomas' parents, Nicci and Brian, and his brother, Dylan, for trusting me with him, making me laugh (especially Dylan!) and for supporting our group's work so enthusiastically.

Please do visit Thomas' Facebook page to learn more about his whole journey and see his progress.
Labels: #RiderStories