Why everyone needs an RDA sidekick: Happy Birthday to Alice 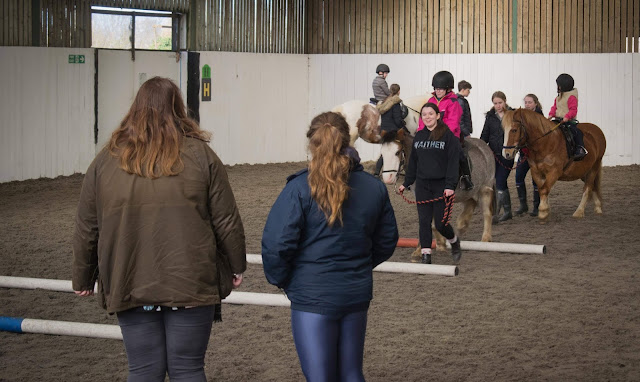 I might fly solo on this blog, but away from my writing I am actually one half of a (some might say notorious) RDA double act. My partner in crime, Alice, had her birthday this week: in her honour, I've decided to tell you why you all need to find yourself a similarly fabulous RDA sidekick, or if you already have one, why you should count yourself very lucky.

Shared experience
I wrote about young coaches in one of my most popular posts: "Nobody would be surprised if a 65 year old commented that they didn't feel particularly part of something where the average age was 21, but nobody seems to want to talk about it when it's the other way round." Alice and I first encountered each other properly at a coaches' training day when she had just started her training and I was feeling a bit burnt out and lonely. I was teaching a lot, worn out by other parts of my life (commuting to my first grad job, competing in another sport...), and really feeling the fact that I didn't have much in common, life experience-wise, with the other coaches at my group. I still very much respected (and still respect!) these older coaches, and consider many my friends, but had mixed feelings about wanting a long and fulfilling future with RDA, and not necessarily having any comrades to see in that future with. Nowadays, we aren't the only young coaches kicking about (although we are definitely the loudest), and we both joke, in a deadly serious way, about signing up for at least the next fifty years. I'm not saying your RDA sidekick has to be the same age as you, but having someone around doing the same stuff, at the same stage of life isn't something to underestimate in terms of power or just plain fun.

Bright ideas
It's so important to share ideas in RDA, and having a partner in crime creates a perfect space for bouncing new ones between each other. Alice and I don't think so differently, but with enough difference to keep the ideas flowing. No matter how experienced you are as a coach, I don't think it does anyone any good to get too stuck inside their own head and own ways of doing things. If ideas don't turn out to be so bright (it happens!) it's also handy to have someone in your corner to help work out where your plan is going next. We have been running our group's Instagram page (I believe it is currently the most followed RDA page on the platform) since the beginning of this year, and are only able to keep it so fun and full because we have two minds powering it at once. Horse and rider combinations, tack, games, and scheduling strategies are constantly on the table for brainstorming between us, and having the affirmation or contemplation of an extra person gives anything new an extra (often better reasoned) energy boost. Often the wackiest ideas that come out of our hivemind set up are the ones which work the best.

Whirlwind adventures
The world of RDA is a bit of an adventure in its own right. We are all constantly learning, problem solving, rising to new challenges, and getting hopelessly caught up in the emotion of it all. That's before we even think about leaving our own yards! Alice and I seem to be having low level adventures basically all of the time: the time we decided to buy all of our helpers (including a full set of callers for a blind rider) a bunch of flowers each to present to them at regionals was definitely an adventure (especially when we had to work out how to transport them all, in water to keep them fresh, to the venue). A recent adventure was visiting Avon RDA (which I wrote about here), where we did battle on the hobby horse show jumping and Alice managed to smash up a jump and nearly lose her jeans simultaneously. Nationals is our biggest and most exciting shared adventure: this year we were interviewed for a feature in RDA Magazine whilst at Hartpury, as well as helping out National Office with social media coverage. We talked a lot about our ambitions and intentions for the future; all are on a similar theme, but slightly different for each of us. We knew exactly what we were going to say because we'd discussed the same things so many times before, but I felt an extra rush of excitement for what the future could hold. I could do all of these things on my own, of course, but adventures are a lot more fun when shared with others. I also would've looked a bit strange if I'd been the only adult on the hobby horse jumping... 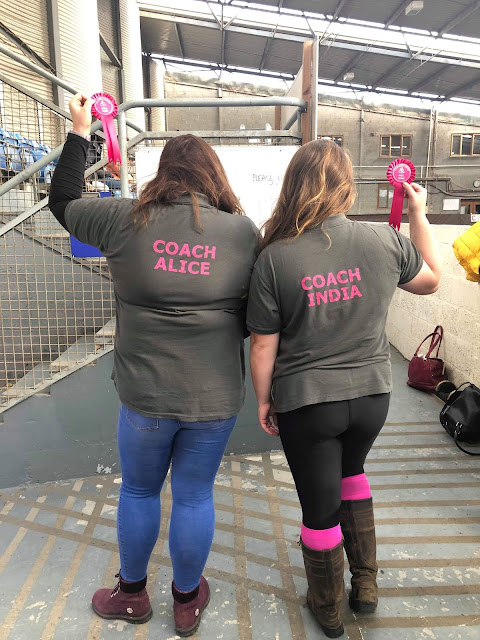 Moral support
Sidekick or no sidekick, I would never want any RDA coach to be without a moral supporter of some kind. Alice and I are both incredibly confident in what we do, in and out of RDA, but that doesn't mean we are never in need of our spirits lifted. If basic probability dictates that the more time you give to RDA, the more likely you are to have the occasional bad day, we're both definitely in line for the odd week at the stables when we could really do with having a good friend around. During this year's preparations for Nationals, one of our horses went lame a little too close to the big event for anyone's liking. One of my riders who was due to ride him was left with literally one hour, in a completely random weekday schedule gap, to run through two tests (including a music test) on her replacement ride. For me, the queen of living her life at least six months in advance, this was just a little bit too spontaneous for my liking. I'm not the type to get flustered, but I was flustered. Thankfully, Alice was and is the type to say "Come on, India. You have this, we have this, and most importantly your rider absolutely has this." She was right, but I'm hoping for no lame horses before Nationals 2020... (Or the "reschedule" button I put on my Christmas list.)

I always make sure that Alice hears how good she is at working out and wanting the best for her riders when she needs to, because it's one of her biggest strengths; it also means that she feels the sting of a stingy dressage judge very keenly, so I try to be ready for that too. This autumn hasn't been easy for me (this is why), but Alice has been there to propel me, gently but firmly, through it, including looking after one of my riders at a training day demo when I unexpectedly needed to be elsewhere. It's a good feeling, knowing that there's always someone in your corner. I think our corner might actually be the same corner.

Burden sharing
"Burden" is a strange word: it implies a load that is unwelcome, and therefore heavy. Giving a lot of yourself to an organisation like RDA does mean that you carry some sort of burden, but for the most part it isn't the bad kind: it's more that it's just consistently present. We all need a break from carrying things, even if they are things we love carrying. Having some sort of sidekick is, I think, an excellent strategy for spreading some of the load. In terms of our communications endeavours, for instance, running a social media profile is the sort of thing that is (and should be) fun to do. There are definitely times, however, that it's a relief to have somebody else at the reins, because a busy week at work or a holiday have let posting that adorable video from the last half term pony day slip to a healthily low priority level. Alice and I have also developed a talent for replying to messages on social media in a manner which means very few people can tell who they are talking to: we can jump in and out of the same conversation according to how our separate days are going (sorry if we've confused you personally...). And if things have been tough, frustrating, or just a bit too full on, we're big believers in the old "problem shared/problem halved" mantra. No matter how busy my life gets, I always seem to be in the right place (sat eating toast in my dressing gown or something) at the right time when Alice finishes up her Wednesday night RDA routine and needs a bit of a debrief. We're in it for the other's ups and downs as much as our own. Our own loads haven't changed in size because of it, but somehow it makes them easier to carry.

Dressing up (whenever it's called for... or not)
One bizarre fancy dress outfit is a curiosity; two is a fashion takeover. That's what we told ourselves when, for Alice's inaugural RDA Nationals in 2018, the disco was "yellow" themed, and we decided that we would attend as Bananas in Pyjamas (see below for evidence). This year's "glitter" theme was too close to our everyday wardrobe choices for a properly coordinated costume, but we are ready to overcommit to whatever next year's theme has to offer. And the year after.

Talking about things that aren't RDA
We managed half an hour once!

If you've got a sidekick, a partner in crime, a cheerleader on your yard, remind them how much they are appreciated this week. Alice, I definitely owe you: for being a much loved guest coach for my riders; for driving me places (even when I've not delivered on my navigational promises); for listening patiently to my stream-of-consciousness blog brainstorming sessions; for giving me a good old prod when I need to pull myself together (mainly when I'm crying at shows). Here's to the rest of our chaotic, glittery, utterly rewarding RDA careers: happy birthday!