Pony Tales: two stories from Abingdon RDA's history, and why recording them is important

How many stories could your RDA group tell?

Words, stories, and memories are important. I've heard many references to "living through history" thrown around this year, but we've always been doing that. For RDA groups, our groups' histories are important repositories of progress, of learning, and of the organisational values which echo across generations and continents. Groups like mine, which is 45 years old this year, predate the idea and indeed means of producing a digital footprint. And, given that nobody lives forever, it is in every group's interest to make sure that the memories, teachings, and understandings which shape their histories are recorded, and not held exclusively by individuals. Do you have any RDA memories which you hope to be able to pass along to the next generation of volunteers or participants?

Angy and Amanda, two of my coaching peers, spent lockdown collecting and editing some of Abingdon RDA's collective memories into a book, 'Pony Tales', which I am very excited to help launch. They have very kindly given me two extracts from the book, one written by Amanda and one by Waveney Luke (former Paralympic selector, senior RDA dressage and equine advisor, and long-time friend and associate of our group). I spend a lot of time writing and editing my own thoughts (and to a perhaps lesser extent, memories) about RDA and my group, but my favourite thing about this collection of stories is that they draw on so many different people's experiences and understandings.
I have spent all of my adult life so far involved with my group, but it had existed for the best part of forty years before I pitched up, and my contemporaries will often have refreshingly different perspectives on what their involvement has done for or introduced to them. It captures a sense of community and richness of experience which would be impossible for a one-woman endeavour like this blog to produce, and I think that the two stories I am able to preview in this post more than express this.
You can purchase your own copy (paperback or Kindle edition) of 'Pony Tales' here, with all profits going to Abingdon RDA. 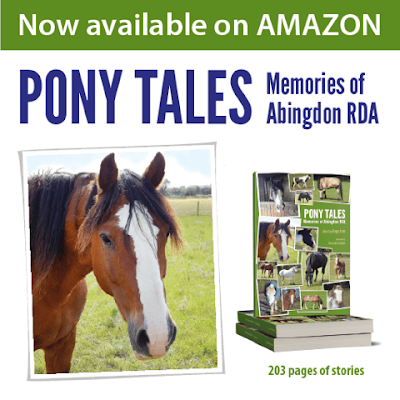 When he was two years old, Daniel's physiotherapist suggested riding as a stretching exercise to help with his disability. Fortunately, he lived at Grove, so within easy distance of the Abingdon RDA centre. This was a great success and he showed a lot of enthusiasm and talent - particularly if he could have some speed! As he became older and stronger he wanted to compete and was classified a Grade 3 (now 4) rider. This meant he had to ride a test including canter which meant being under control! Ann Barlow, always looking to promote her riders, appealed to me, ‘hadn't I got something for Daniel to ride?’. Luckily there was a suitable small horse called Casanova in our yard at the time. and the owner very kindly offered him for Daniel to sometimes come and ride. It was a bit further for his family to bring him but they rose to the occasion and took regular trips to Denton where Casanova lived. They formed a good partnership and won the Grade 3 class at the RDA National Championships as well as other national Grade 3 classes. As a result they were selected for training as part of the National World Class Start programme. With 3 other young para riders he went to compete in Madrid where they rode borrowed Spanish horses trained for bull fighting; a challenging experience but Daniel kept a cool head and enjoyed the trip where they won the silver medal (Germany won gold).

As Daniel got older, Casanova became too small for him to ride, and now taller horses had to be found. He rode a young horse at the Millfield Junior International and won his class, and the following year another kind owner lent him a horse. He continued to train with World Class and took part in two more International shows.

At 17 the Wantage Rotary Club, who had been giving him support through Sports Aid, nominated Daniel for the Young Citizen's Award for his positive attitude to life, his courage in facing up to his
disabilities and his concern for others.

Daniel went on to take a law degree at Oxford Brookes University. While he was there he was able to carry on with his riding, but after this he needed to go to London so the horse that his father had helped him to buy had to be sold.

While I was involved with him his ambition, courage and dedication were inspiring and he coped with good and bad times with fortitude. Daniel was always keen to help other riders and grateful to his sponsors. I gained a lot through helping him; my only complaint was that he was a very poor companion when I was driving him in the lorry to and from competitions as he always fell asleep!

'Anyone for Apples?' by Amanda Graham

I had only been a helper for a few months when Regionals started to loom. I thought, I can do that!

A beautiful sunny day in May appears, as do horses, yard staff, helpers, coaches, riders, parents at the beautiful facility at Wellington. Wow what a place! I took the three riders I was helping around the course on foot before it all started, which was inevitably slightly different to the one we had been practising back at Abingdon RDA. What I didn’t notice was a really important difference on the apple trees. We had been practising with plastic apples. What was in the baskets on this course, were real apples, not only real but they were from Waitrose!

So I may not have noticed, but guess who had? Yes, Mr Brown. (Mr. Brown is a general favourite amongst the RDA ponies, who happens to be quite keen on his food…)

So off my first rider went, and as we approached the apple trees Mr Brown’s nose was straight into the basket, and there was no tearing him away! Fortunately there were lots of apples and I managed to persuade him not to eat them all! I was wiser with the second rider, and used all my body energy, whilst hopefully not being seen by the judges, to get his head past the apples, he only got one apple - and on the move that time. Third time lucky, apart from the fact he was probably full of apples, he sailed into the right position with the girth level with the apples instead of his head. What a monkey he is - that’s why we all love him so much!

Read more by purchasing your own copy of 'Pony Tales: Memories of Abingdon RDA' here. Every book sold raises money for our group, keeping our own story going for many more chapters...