5 strange reasons that coaching RDA is like coaching competitive cheerleading 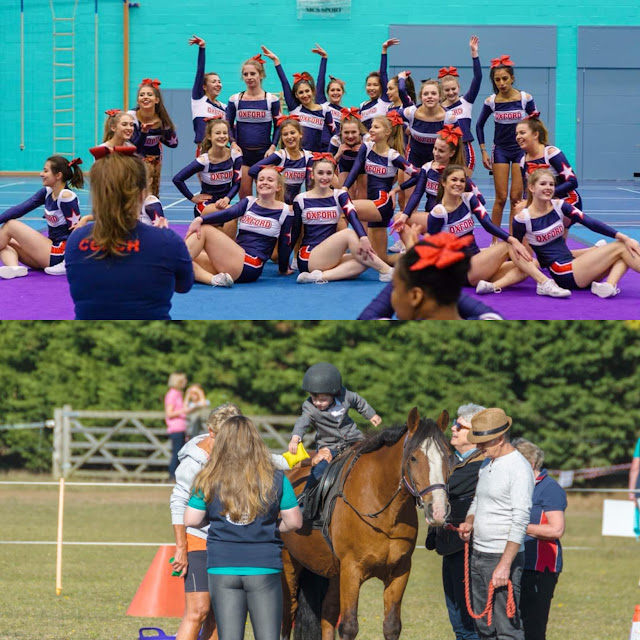 I saw a Facebook post a couple of weeks ago which suggested, among other things, the importance of transferring lessons to the sport we coach learned from playing or coaching another. It made perfect sense: when we look at academic or general life skills, there is often a big focus on transferability, and those of us who have had experience of coaching in any context other than our current RDA group are in a privileged position in terms of our own skill sets. I competed in another sport at university for four years, and then moved across to coaching it for two, so I could count myself as a member of this bracket. Most people respond with an involuntary chuckle, however, when they hear that my other sport was competitive cheerleading.
"But where will you do this cheerleading? On the streets?" my group's chairman, the inimitable Ann Barlow, asked when I once explained I would be absent from the stables in two Saturdays time to attend a cheer competition. In a nutshell, competitive cheer probably isn't what you think it is. Teams perform heavily choreographed, physically exhausting routines two and a half minutes in length, where they stunt (lifting and throwing team mates into the air), dance, and perform gymnastic moves. In keeping with my secondary school levels of commitment to PE ("India usually remembers her PE kit"), no interest in supporting, watching, or understanding more traditional team sports is required: cheer teams are marked against other cheer teams, just like riders in a dressage test. This article from earlier in the year gives particularly good insight into my former world of university cheer, with the bonus of also featuring my old team, the Oxford Sirens.
My career as a cheer coach was pretty short lived, and my commitment to RDA was the biggest reason why. It turns out that coaching two sports in your spare time, with a busy full time job and an occasional wish to slow down and do nothing, is pretty unsustainable, especially if you want to do a good job of both (and maybe your real job as well). That's not to say that I don't still love the sport and have learned things from it which I am able to use just as readily in the RDA world. If you still aren't convinced, I've put together a few pertinent examples...
1. Risk
I don't think there is a single sport which doesn't involve some level of risk, but throwing someone twenty feet in the air or placing them atop half a tonne of living, breathing, independently thinking horse both occupy a place in the category of "Risk Sport". As a coach of either, you will be thinking a lot about spotting, mitigating, and recovering from risks. I've ridden most of my life, but only started cheer in my early twenties; I felt the pressure of handling so much risk far more keenly when I trained as a cheer coach as a result, and genuinely believe that the different focus sharpened up my risk perception for RDA too. Both sports are exhilarating to watch and to do, and for that reason a coach of both or either has to be similarly switched on to the things which could go wrong. Where do the most accidents happen? Definitely cheer, although the majority are minor: bruised arms, sore shoulders, and the occasional black eye if you're really unfortunate. Riding, especially in RDA sessions, is taught at a much more gradual pace, in sessions smaller than a squad of thirty, and also requires protective headgear as standard.
2. Subjective scoring
RDA competitions are an entirely different sensory experience to cheer competitions, although they always mean a hideously early start and no matter which one I'm attending, I always end up doing at least three people's hair. More universal still is the likelihood of hearing "well, I don't know what the judge was watching" as the crowds throng away from the prize giving. Cheer coaches and RDA coaches each know how to be proud of their athletes, and feel perceived injustices on what seems to be pretty much the same deep level. On a conceptual level, the scoring isn't that different: where a dressage test finishes in collective marks for the submission of the horse and the aids of the rider, a cheer score sheet ends with collective marks for choreography and overall impression. Every cheer routine is different and choreographed to be eye catching, so is closer to a freestyle than a regular dressage test with fixed movements. (The closest RDA discipline of all is vaulting, with its obvious crossover with gymnastics, but I am not sufficiently expert enough to explore the similarities further!) Cheer routines diverge from dressage in that they are judged by a panel, although each member of that panel focuses on a different element of the routine; equivalent to having an individual judge for walk, trot, and canter, whose opinions don't count outside of their designated pace.
I think the ups and downs of coaching a competitive sport are a great way of developing character. We talk about how important it is for our riders to learn to win and lose graciously, but it's just as good for coaches to learn how to handle the same ups and downs. Subjective scoresheets can be an endless source of frustration, but there is a certain enjoyment to be found in working out how to enable our athletes to get the best from them.

3. Misunderstandings
Somehow, I ended up coaching two sports which both require constant explanation to outsiders (see the opening of this post). There are words and phrases which make me bristle for both: "horse dancing", "sweet disabled children", "sidelines", "pom poms" (pom pom wielding occupies a different part of the cheer world, and one which I was never interested in inhabiting). My old cheer team have just this year been embroiled in a very public struggle to have their sport recognised as a proper university sport by a university better known for duller and damper sports like rowing. Equestrianism is, at least, already an established Olympic and Paralympic sport, and although we wish for more disciplines to be recognised at para level, do already have a national para dressage team of unparalleled international success. Summarising the point of a sport in 3-4 snappy sentences is a life skill, of sorts, and working on the "RDA in Lockdown" impact survey (I will link this when it is available on the RDA website) recently has reminded me of why the ability and willingness to defend the sport you coach is valuable for far more than just your own purposes.
4. Physical limits (or not)
If any activity allows you to do or achieve something you would have otherwise thought was beyond your physical limits, it is empowering. In any type of sports coaching, we have a responsibility to our athletes to lay the foundations for those empowering experiences. I see empowerment whenever I am at RDA; it's in the DNA of the organisation. I saw it (and felt it) plenty at cheer, too. I don't think that this is surprising: people only tend to doubt the physical value of cheer when they haven't had the full definition and are still thinking of people shaking pom poms on the sidelines. Although the performance element of the sport means that all of my team's formal photos involve fake tan and glittery hair bows, a cheer coach is more likely to compliment and encourage physical strength, team work, technique, and resilience. Cheer skills can be built up (at least, on a team of non-disabled, physically fit young adults) pretty quickly, even by beginners, and I never got tired of seeing people amazed at having to redefine their idea of their own physical limits. I liked the glitter and the dancing when I was competing in cheer, but ultimately I stayed because I loved the rush of doing something for a team and how strong it made me feel.
I know that a similar sense of empowerment is present in every RDA session I teach. The pushing of physical limits isn't as explosively obvious to the human eye: I like to avoid throwing riders in the air, or balancing them on top of my upstretched hands. But for riders (and riders' parents) who have had much of their life experience defined by being told what they can't do, even the smallest thing on horseback is pretty next level.
5. Trust
So many of my conversations about RDA circle back to trust. In cheer, too, the importance of trust between athletes and between athlete and coach is absolute. Perhaps the level of importance is such because of the safety considerations involved in both sports? In a cheerleading team, athletes perform stunts (the lifting/throwing parts: arguably the most exciting and most definitive part of the sport) in small teams or stunt groups of about four people. Although there needs to be a strong sense of team effort throughout the entire squad and a good rapport with the coach, the stunt group is where trust is the most important: those in it are directly responsible for each other's safety, and have to work together to learn how to perform new skills and bounce back from any (many) dodgy attempts. The way this relationship works between four or five people is very similar to how my RDA riders learn to trust their horses, and in some cases, their leaders and side walkers. In both cases, it's important for coaches to understand how big the responsibility is to generate and coordinate so much trust.

Of course, there are plenty of ways which my two coaching experiences refreshingly diverge, and plenty of things each world could learn from the other. I often think of prize givings at cheer competitions and chuckle to myself when I'm at RDA ones, clapping sedately in and around a marquee: cheerleaders are not restrained with their emotions en masse and event producers like to tap into this by adding suspenseful music and dramatic pauses to announcements (and placings aren't available to view on a whiteboard before the prize giving either, so those screeches are all of genuine surprise). Cheer is a genuine team sport, and as much as I love teaching five or six complete individuals to ride in an RDA class, I do miss the buzz of a cheer team's camaraderie. When my group lessons are actually possible again, I'd love to try and replicate that in some small way.  Cheer is also an extroverted, unapologetic performance sport: I know that it's BD rules (although not RDA...) for dressage to music tracks not to have lyrics, but I genuinely find it hard to understand why this is the Done Thing when in another life I would have lost my team marks for not lip-synching enthusiastically to Ariana Grande with another girl's foot mashed into the side of my face.
In any case, experience is always valuable, even if it seems on face value like it won't be useful to another kind of experience. For coaches, who you are and how you view your role isn't likely to change that much across sports either. Cheers to that. 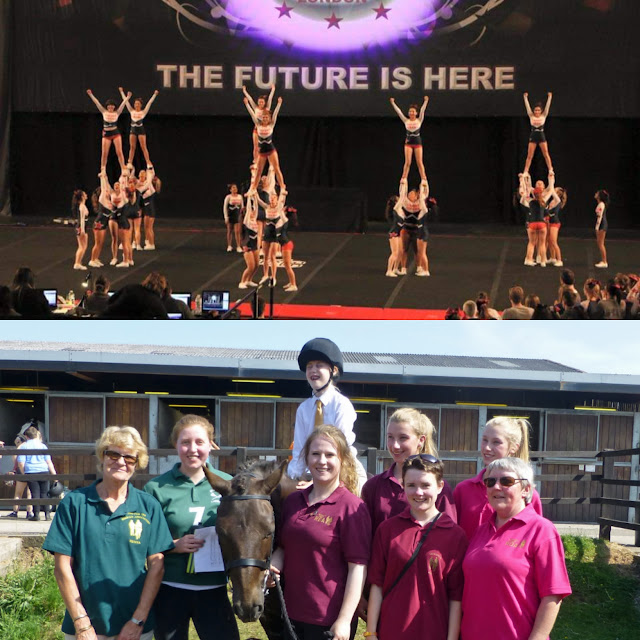