Futures, fulfilment and frustrations: what are young RDA coaches thinking about?

I was really pleased to be offered the opportunity to speak on a panel of young coaches as part of RDAUK's coaching conference: this year hosted as evening webinars spread out across an entire month. (There are another two yet to run on Tuesday 23rd and 30th November, so if you're reading this before those dates you can still sign up to watch live or receive recordings here.) Increasing the representation and visibility of young(er) coaches within RDA has long been a big personal interest of mine, so the platform, as well as the opportunity to scheme and vent with those sharing it with me (Megan from Pegasus RDA, Kyle from the Elisabeth Curtis Centre, and Lizzie, from many groups but most commonly known as The Para Vaulter), was much appreciated. I wanted to use this week's blog to commit a few thoughts to writing and give those who weren't able to attend an idea of what we talked about.

Firstly, the chat box for this session isn't the first place I've been asked to define what a "young" RDA coach is. The RDA Young & New Coaches Facebook group (which I'm hoping will get a bit of a boost from the interest it received as a result of this session!) deliberately doesn't define this to make it as welcoming as possible to those who might benefit from it. "Young" is often arbitrarily cut off at about 25 - I always use railcards as my default example - while someone could be the youngest coach at their RDA group at ten years older than that; be a brand new coach and self-identify as "old" (I'm not labelling anyone here!); or be passionate about change and progress within the organisation at any age at all.

I wanted to have more of a network for younger coaches because I've felt lonely and in need of a closer peer group as the once youngest coach at my group, and because I can see myself spending the next fifty years growing into my skills as an RDA coach and helping the organisation develop and evolve. If you can identify with either or both of these things, you've got the sort of mindset this panel was speaking with and about. The fact that the panel existed doesn't mean that other forms of experience and mindsets don't or shouldn't exist within RDA: 10% of our volunteers (source: RDAUK 'Horses, Health & Happiness': data is not currently available on the specific proportion of young coaches) are under 30, versus 75% over 50. RDA's new strategy features ambitious plans for growth, which will need to be supported by those planning on sticking around for the next 50 years as readily as those who have given so much to making it flourish for the first 50. It seems fair enough that we might need a few more young coaches about the place - and even fairer that the landscape in which we are all coaching is different to the one which earlier cohorts of young coaches knew.

Although I enjoy venting my own frustrations, trying to work out solutions to problems of all sizes, and striving for better, it was also a genuine pleasure to hear from coaches at similar life stages to my own talking about what got them hooked on being an RDA coach, and why they want to keep making space for it in their lives. Ultimately, we all had similar reasons why: the inspiration drawn from other coaches (of all ages) and the participants we work with; the powerful sense of fulfilment and fun; the achievements and opportunities of all sizes; and the fact that we manage to find space in our lives for RDA despite lots of competing pressures, and without necessarily knowing how we're managing it. Having the space to discuss all of these things highlighted to me how complicated the future of RDA could be - but there's no better way to feel excited about it than in the company of those who are motivated to head there with you.
A big thank you to Megan, Kyle and Lizzie, and also to Jo Hayward from the RDAUK Training & Education team for inviting me. I'd love to continue the conversation (about the future or present) with anyone who came along to the webinar. This blog post is already a long one, and I know I haven't managed to talk about absolutely everything! 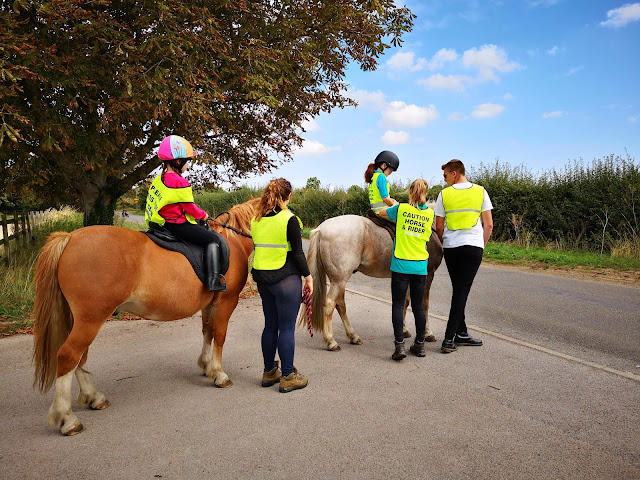