Three RDA Saturdays missed and two weeks away from the office. I can't be alone in feeling that time has taken on a different form and feeling to the usual, or that I have taken the regular social interactions that (in usual circumstances) power my days absolutely and completely for granted. Despite being a true extrovert who draws a lot of energy from being with other people, one of the quieter pleasures of coaching which I am missing the most at the moment is observational: watching partnerships form between my group's horses and my riders. There are many, many photos in my personal RDA archive which demonstrate how important these bonds are to our entire group. Here are four which made me smile in particular. 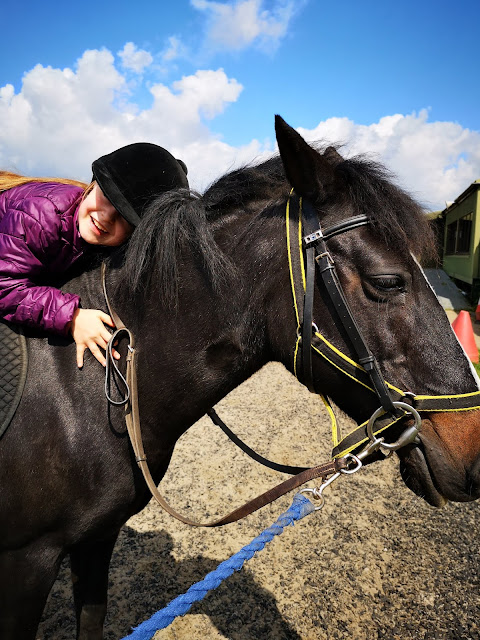 Sophia was featured in last week's Wednesday post too, riding the same horse: Candy. Candy is actually my favourite horse at our group (shhh...). She is an old lady now, but still sparky and generous. She has a slight "diva" streak which I appreciate: she has no time whatsoever for bad behaviour from her gelding field-mates, likes affection on her own terms (although she won't do anything worse than look disapproving if it isn't), and fairly regularly puts an enthusiastic "turbo boost" into an exercise which belies her "living a quieter life" status. She is, for the most part, very easy on the lead rein; she is an intelligent mare and worked out what was required of her for her new RDA job after a few early lessons spent asking her leaders why exactly they felt like she needed their assistance.

Sophia loves all of this about Candy too, and Candy resigns herself fairly gracefully to Sophia's all-in displays of love. I think she enjoys it really. Although she doesn't discriminate in her enthusiasm for all of our horses, Sophia has found particular comfort and freedom in Candy's saddle over the past few months. She has seen a lot of medical complication and intervention in her nine years, and most recently has developed scoliosis, which took a very abrupt upwards turn in its development towards the end of last year. Suddenly, the child who had never, ever had a problem with her riding posture couldn't keep herself straight in the saddle. Candy's smooth paces and "just fast enough" speed (she understands when turbo mode isn't needed) were what Sophia needed to help both of us work out how to handle the changes in her back. When we go back to the stables I do want to stay true to my principle of creating "universal riders" and find Sophia some new partnerships, but I know this particular partnership (her first ever competition ride) will be an enduring one. 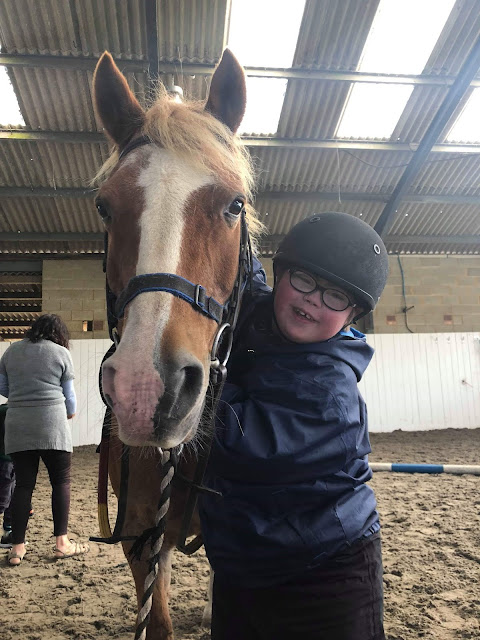 From the same class as Sophia and Lucy, Thomas, and Matilda, is Connall. This photo of Connall also happens to be of one of my favourite pony partnerships of all time, with characterful Heinz 57 (he is the colour of a baked bean...) pony, Jasper. Connall and Jasper have a lot in common: they are both fundamentally good at what they do (Connall has a beautiful riding position, and has according to his previous coach always been a natural in the saddle), but have a definite cheeky streak. Their partnership wasn't slow burn: the first time I ever decided to try Connall on Jasper, he declared it a match. He is enthusiastic about everything Jasper does. His choppy trot (it's hard when you have short legs) is no issue for Connall, who scarcely budges out of the saddle as he laughs away. If Jasper is feeling extra fast or extra slow (less common) then he might get a "Hey, stop that!" or "Oi, cheeky!" from Connall, but it's never an issue. They are still the best of friends.

Unfortunately, this partnership reached a sad milestone recently: Connall has outgrown Jasper, and will need to forge a new partnership or too with a bigger horse. He still gives Jasper a big smile and a wave from the gallery when I am using him for other riders in his group, and the memories I have of this characterful team will always raise a big smile from me, too. 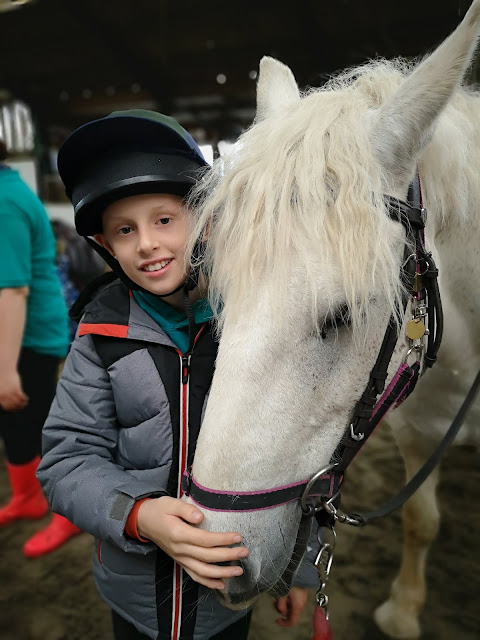 I don't actually coach this rider: Alfie is one of Alice's riders, but definitely embodies the idea of a "universal rider". I love this picture of him and Prin (Princess), but Alfie is happy to treat every horse on our yard with the same enthusiasm and love as he is showing to her here. I think he has ridden every single one of our horses, bar one very recent (and small) arrival. He has his favourites on a list (part of which seems to change with the season) but any horse is a good horse: an attitude that will take him a long way.

This photo was taken at the end of a particularly fun lesson. It's fun as a general rule to help out in another coach's sessions and go back to being a helper. Your focus only needs to be on one horse and one rider, rather than four or five or six combinations, and you have the chance to have a good old chat as well as making sure your rider gets the best out of the lesson plan (which you don't have to think too much about!). This was the first time Alfie had ridden Prin, who despite being the perfect RDA horse in terms of temperament had taken a long time to come into work with us due to being involved in a road accident on the day she was brought to our yard. Last spring was when she really started to come into her own, although her reputation is not for speed, which Alfie wasn't so sure about because his personal brand definitely involves a bit of adrenaline. I'm not sure what was in the air that day, or what Alfie whispered in her ear, but Prin turned out to be on flying form: high stepping, floating over trotting poles, handling like a race car. Alfie was completely entranced. "I love her!" he said as the lesson ended, clearly carving out a new space in his list of favourites especially for her. 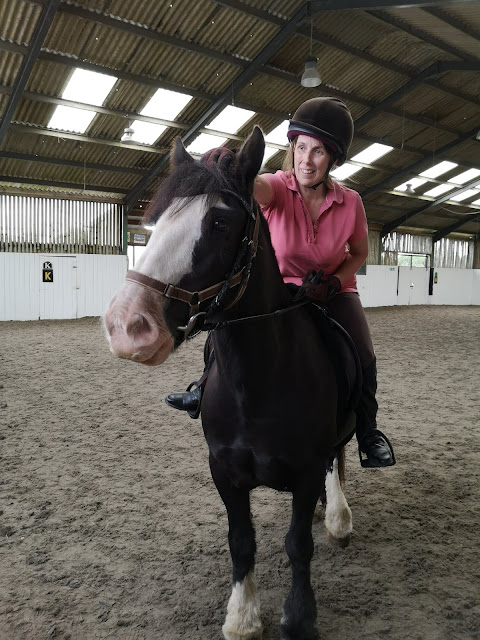 It's unusual for me to have an adult rider to feature on my blog, as all of my regular riders are school-aged. Anna, however, will always count as one of our yard's "children". You can read her story (in her own words) on the group's website, here. She grew up as part of the group from the very beginning, and despite having work and family to take up most of her time has always kept a supportive eye on what we are doing. As someone who was competitively active in the early days of things like the RDA National Championships, I admire Anna as a bit of a trailblazer for our current crop of young riders (although we always tell her she isn't old enough to have been there).

Anna hadn't ridden for about four years when she suggested to me and Alice late last spring that she'd like to get back on. She had been coming along with Woody's parents to support him in his lessons and, naturally, realised how much she had missed the horses. We were able to hook her up with a few rides, including some on Maple, pictured above. Anna would be the first to admit that she was expecting it to be a seamless transition from being on a break to being back in the saddle, and she was a bit upset that things hurt more and moved less than what she remembered. We, of course, were able to see better than her that she was being very hard on herself, and so was Maple, whose obliging nature and rhythmical walk meant that Anna was still keen to keep pushing herself. Our hope is that she is able to start riding more regularly when we go back to RDA (Saturdays are very busy and it's hard to slot extras in). You can stop riding, but a good rider never stops being a good rider.

Have you enjoyed reading this blog?

All RDA groups are currently closed as part of the response to the ongoing Covid-19 pandemic. My group, Abingdon, is likely to suffer financially as a result of this closed period: our busy fundraising calendar has been wiped clean for the foreseeable future, meaning that we will lose thousands of pounds which are desperately needed for the upkeep of our yard and the care of our 14 horses.

We have set up a Covid-19 appeal for Abingdon RDA, and are asking in particular for people to consider donating a small sum of money which they will not be spending as usual during this difficult time: the cost of a trip to a coffee shop, or petrol you are not using for commuting or coming to the stables. We have been so touched by the generosity of our supporters to date. If you are not able to donate (and we appreciate that not everyone can), sharing this blog post is a great way of spreading the word and showing your support. It is all appreciated so much.